skip to main | skip to sidebar

Please take a moment to sign this letter to Sarah Palin.
Posted by DownTownDan at 5:55 AM 2 comments:

I have never written about politics on this blog. If you want politics, you can read a newspaper or watch TV. But it's becoming clear to me that I need to say a few things about Sarah Palin.

I know that a whole lot of people in the Ds community are fervent supporters of Palin. I also know that a whole lot of them aren't. You can officially count me in the latter group. I'm not going to go into all the details of why I dislike Sarah Palin. Half of you know exactly why, and half of you don't care to hear it. So let's just push aside the appetizer and go straight for the main course:

The "fucking retarded" debacle, with a side of new potatoes and asparagus. Pairs wonderfully with merlot.

Rahm Emanuel was out of line when he used that slur in a staff meeting. End of discussion. And normally I would say that it's great that someone drew attention to it, got the press involved, etc. Normally I would be very happy about that. Unfortunately, the person who chose to call him out was Sarah Palin. As someone who does not support Sarah Palin, as someone who questions her motives, I thought I smelled a rat. I suspected that this was a calculated political maneuver. But I gave her the benefit of the doubt, because this issue is very personal to me. It's an area where I will happily set aside politics and personal feelings and get behind someone from the other team. I WANTED to believe.

And for about five minutes, I did believe. And then, Sarah Palin found herself backed into a corner by a guy who plays chess, not checkers. Rush Limbaugh. I'm not entirely clear about the nuances of Rush's motivations. I don't know if she just caught him on a bad day, or if Rush was trying to kneecap Palin before she becomes a larger problem for the Republican party as they begin laying the groundwork for the next election. Either way, Rush saw an opportunity to grab some of the spotlight for himself at Palin's expense. And so he took a turn tossing the "R" word around, to great effect. Which, I think, is the last thing Palin anticipated.

Palin handed Limbaugh a free pass. She knows that Limbaugh's audience is larger than the Ds community. It's a simple numbers game. So Palin sold her child's dignity for thirty pieces of silver. And try as she might, she isn't articulate enough to spin herself out of this, no matter how many notes she has written on her hand. Her naked ambition is on full display. And so, from this point out, Palin will never again get the benefit of the doubt - not from me.

I'm late writing about this. The reason I'm late is because I didn't ever plan on tackling this one. I didn't want to alienate any readers who happen to disagree with my politics. I have a broader message to share, and I would like to think that all people - no matter their political or religious leanings - could feel comfortable visiting this blog. I still hope that's possible. But the longer I sat on this issue, the more uncomfortable I became. Because it slowly became clear to me that I was doing the very thing that Palin did, the thing that disgusted me and made the bile rise to the back of my throat. I was giving Palin a free pass, letting her slide, to keep from losing my readers. I was playing a numbers game of my own. And it's a game I have decided I will play no longer, because Ozzie's dignity is worth more than that.

Ozzie deserves better than Sarah Palin.
Posted by DownTownDan at 6:35 AM 34 comments:

This post is particularly difficult to write. It's not easy to admit when you're wrong. But I owe the world an apology, so it's time for me to swallow my pride.

Since Ozzie's birth, I have become an activist for children who have Down syndrome. Specifically, my goal is to stamp out online hate speech that is directed at the mentally disabled. But the recent national debate about the word "retarded" has shown me that this is a fool's errand. A retard's errand. Because in the past week I have come to understand the true value of retards. They are worth their weight in gold.

For example, they can be used as a classic visual joke. Just check out this clip from the Colbert Report. Stephen Colbert is one of my favorites, and this is Stephen at his finest:

You might think that a visual joke would be enough. But retards have so very much more to give. See how they offer themselves up for a punishment in this article about football, brought to us by Brian Allen Carr at Dark Sky Magazine: 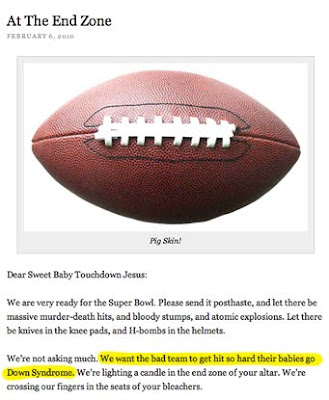 Those retards are just so cool about it, always stepping up to be the butt of the joke. Who knew retards even cared about sports?

So, surely that's it, right? That's all they're good for? Not even close. Those retards just keep giving. Need a snappy comeback? Turn to the retard. Check out this comment I read on my favorite movie news site last night. I just casually stumbled upon this: 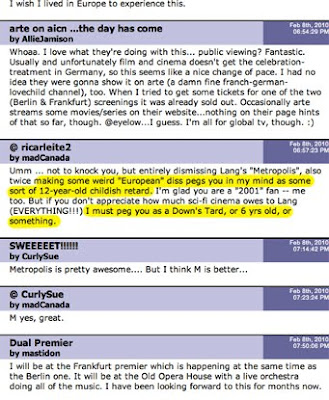 Good one, madCanada. Deft use of the "R" bomb. Totally appropriate as a metaphor when you disagree with someone's taste in film. I mean, ricaleite2 is totally a retard. Am I right?

See? Society needs retards. The words "retard" and "retarded" are fundamental building blocks of the English language. Removing them would be like striking the letter "E" from the alphabet. Parents like me, who have been inexplicably offended by hearing those slurs tossed around, are selfishly trying to steal what we don't even rightfully own when we speak up for our children. And if you don't agree - if you just can't get this through your thick, retarded skulls - here's a brilliant commentary by comedian Lewis Black from last night's Daily Show. He really hammers that point home:

Hear that laughter in the audience? Those people agree! They love retards! They love all things retarded! That faceless laughter is what finally made me see the error of my ways. I finally understand that I'm just being an asshole.

When Ozzie was born, I was sad. I was sad for awhile. But now I realize what a retard I was for feeling that way. Because the day Ozzie was born, fate handed me a living punchline. A little wriggling, squirming joke. A lifetime of laughter. And slowly but steadily, I'm learning that it's okay to love him a little less than I love my daughter. Society is constantly reminding me that it's okay to laugh AT him, not WITH him. That's his true value, the gift of the retard, and it just warms my heart.

Last night I gave Ozzie his breathing treatment. I placed a little purple breathing mask, which is adorably made to resemble a dinosaur's face, over his nose and mouth and turned on the machine that billows medicated fog into his lungs. I do this because Down syndrome has affected the anatomical structure of his airways and has weakened the muscles of his tongue and throat. He doesn't breath well, especially when he has a cold, and he has a cold right now. I thought about that as I held him. I thought about how unfair it is that he has to fight to breathe. And I'll admit, I started to get a little bit sad. But then I looked down at him, and instead of seeing my loving child, I saw him for what he really was - a wheezing retard in a dinosaur mask. Comedy gold. Can I get a rim shot?

So please, world, accept my apology. I didn't mean to be a buzzkill. I just didn't realize how much you treasured retards.
Posted by DownTownDan at 4:43 AM 26 comments:

Daniel Niblock is a graphic artist and animator who lives in Durham, North Carolina. On July 14, 2008, he became the proud father of his second child: Ozzie, a 4 lb., 11 oz. baby boy. Ozzie has Down syndrome. This blog chronicles the bewildering experience of stepping into a topsy-turvy new world. It began as a place where family and friends could come to read words that were too difficult to speak aloud. It has transformed into a place where people can read about discovery, strength and love. Hopefully these collected reflections can help others find the way out of the darkness and into the light.
I've got a few other blogs, too:

Ds Blogs Written By Other Dads

Some Ds Blogs I Love