skip to main | skip to sidebar

I have been asked to explain the origin of my children's names. So let's tackle these one at a time.

Why Layla?
Are we big Clapton fans? No, not really. We had a really hard time picking a first name for Layla. I wanted it to be uncommon and slightly exotic. Dina and I went through every name in the book, and we finally agreed that we both liked Layla. Dina liked it because it has Arabic roots, and she is part Syrian. Layla is traditionally spelled Leila, but we worried that she would be faced of a lifetime of people mispronouncing it as "Lye" la. So we decided to use the Clapton spelling to spare her that irritation.

Why Opal?
Because it is – and always has been – my favorite stone (and it's Dina's birth stone). For the life of me I can't figure out why opals aren't worth more than diamonds. Actually, I guess I do know (it's called the De Beers cartel) but we won't get into that right now. Anyway, I wanted my daughter to have some sort of real thing associated with her name. I used to have a friend whose surname was "Wolff," and I always thought it was cool that he had an instant motif built right into his name. I like names like River and Rose for the same reason. In that spirit, Opal worked quite nicely. It's unusual, exotic, and, when combined with Layla, results in an enchantingly lyrical name. Unfortunately it's a melody that grinds to a screeching halt with the addition of "Niblock." But I can't do anything about that.

And now my son, Ozias Andre:

Why Ozias?
This is a weird one, I know. I take full responsibility. I wanted a son named Oz. I love the name Oz. It is described in one of our baby name books as having a somewhat magical quality. I think it's the coolest guy's name ever. But we didn't really want to name him Oswald, or Oscar, or Ossie. We tried lots of combinations of "O" first names and "Z" middle names, so his initials would be O.Z. But that didn't work either, because we didn't like any Z names. And then finally I stumbled upon the name Ozias. It was mentioned briefly in a baby name book, not as on official entry, but in a listing of names similar to "Oswald." And I couldn't get that name out of my head. It's a biblical name - it means "strength of God." It's a king's name. The more I said that name, the more I liked it, and the more I liked it, the more I realized that no other name would do.

Why Andre?
Because it's my middle name. It was my grandmother's maiden name. A connection to a chapter of my history that, because of unfortunate circumstances, I know only from stories and photographs. So, along with his extra chromosome, Ozzie forever carries that connection, too.

I will make one footnote about Ozzie's name. When he was born, I had a brief crisis of conscience. I wondered if I might be doing him a disservice by giving him such an unusual name. I had wanted to give him a name that would help him stand out from the crowd, but when I learned of his diagnosis, it was obvious to me that standing out would never be an issue for him. I wondered if his name might just make him stand out even further, perhaps in a bad way. Yeah, I thought about it - for about five minutes. For the very first time, I was forced to decide whether to treat him like a normal child, or treat him differently because of the Ds. And I made my decision - I would be damned if I would allow Down syndrome to strip my son of his birthright.

And I will now tag Lisa at Genetically Enhanced, because I know she has an interesting story about Sheridan's name that she is just DYING to share. So get busy, Lisa. Unleash your inner geek.
Posted by DownTownDan at 7:39 PM 8 comments: 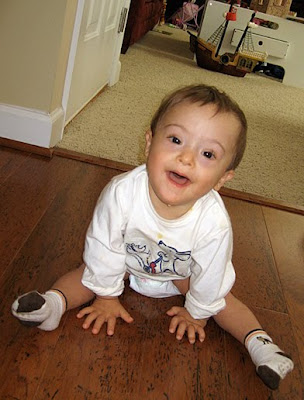 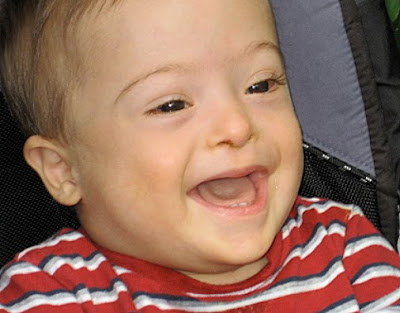 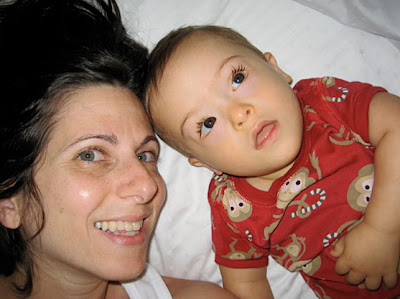 Today I want to write about something that Down syndrome has stolen from my life.

I'm a funny guy. Maybe that's debatable, but I think most people would agree. I enjoy funny movies and funny stories and funny songs and funny jokes. I used to be an aficionado of stand-up comedy. But since Ozzie's birth, the laughs don't come as easily. Why? Because stand-up comedy has become a curious mixture for me - equal parts laughter and anxiety. As I watch, I anxiously anticipate the next retard joke. I don't even like to watch stand-up unless I'm alone, just to avoid uncomfortable situations. And there's nothing funny about that.

I used to think this was all in my head, but this new reality was recently driven home like an arrow through my head (one of those joke ones) as I listened to the podcast of my favorite comedian. He went on an extended jibe about how awesome it would be to pretend he had a Down syndrome kid so he could get out of work whenever he wanted:

"LIttle Johnny - my little champ. He's such a fighter. I just need to be there for him..."

Hardy har har - this went on for several minutes. Apparently my life is extremely funny. It was nice of him to point that out - now I don't feel the need to tune into his show to have a laugh. I don't listen to him any more. And I hate that - I really do - because he really was my favorite comedian. I still think, deep down, he's a decent guy. But that bastard owes me a big, fat apology. Hear that, Ace man?

You may notice I didn't mention him by name. And the reason I didn't is another sad fact of reality. If I did, there's a good chance his fans would take notice and start leaving offensive comments on my blog. They would tell me to lighten up, it was just a JOKE.

No, I won't. I can't. Down syndrome stole my sense of humor. A portion of it, at least.

I wish, one day, we could all enjoy stand-up comedy.
Posted by DownTownDan at 3:15 AM 12 comments:

Daniel Niblock is a graphic artist and animator who lives in Durham, North Carolina. On July 14, 2008, he became the proud father of his second child: Ozzie, a 4 lb., 11 oz. baby boy. Ozzie has Down syndrome. This blog chronicles the bewildering experience of stepping into a topsy-turvy new world. It began as a place where family and friends could come to read words that were too difficult to speak aloud. It has transformed into a place where people can read about discovery, strength and love. Hopefully these collected reflections can help others find the way out of the darkness and into the light.
I've got a few other blogs, too:

Ds Blogs Written By Other Dads

Some Ds Blogs I Love